This is a guest blog from www.caninefitness.com.

Dogs? The new tool for cancer detection in humans?

Cancerous tumours produce volatile molecules and it is thought that these noxious compounds could perhaps be detected by the sensitive noses of dogs thus alerting doctors to the presence of cancer in patients long before they were symptomatic. Early detection of cancer is still one of the most critical factors in treating and determining the outcome for patients.

In 2004, researcher, Carolyn Willis and her team published the results of a study they had conducted looking at whether dogs could be trained to determine the presence of bladder cancer in samples of urine by odour alone. Six dogs were trained to detect bladder cancer in urine from sample given by patients who had transitional cell carcinoma. These dogs were then given seven samples, 1 from a patient with bladder cancer, and 6 without cancer and asked to identify the sample from the cancer patient. Chance alone would indicate that they would select correctly 1/7 times (14%). The dogs, as a group, had a success rate of 41% in this trial demonstrating that there is a good likelihood that dogs can, in fact be trained to identify cancers.

In 2006, a study using household dogs, carried out by Michael McCulloch and his colleagues, looked at whether dogs could be trained to identify lung and breast cancer patients based on a breath samples. The researchers took 5 dogs from pet families and put them through training. In a double-blinded study (both researchers and handlers were unaware of which sample was from a patient with cancer), the dogs were asked to identify the samples taken from cancer patients. In this study the results were stated using “sensitivity” and “specificity” criteria. Sensitivity refers to the ability to positively identify the sample with cancer and specificity refers to the ability to ignore the non-cancerous samples. With regards to the lung cancer samples, the dogs were very high for both sensitivity and specificity when compared to conventional biopsy techniques. With breast cancer they had high specificity and but did not perform as well on sensitivity in the breast cancer patient as they did in the lung.

Currently there are organizations, such as “InSitu” who are participating in federally funded studies in order to establish low cost, non invasive methods of testing for cancer and to start up cancer detection centres nationwide. Their teams of cancer detection dogs have indentified cancer at Stage 0 in specimens, have sensitivity results of 88% and specificity of 99% for detection of early stage cancer and are currently designing studies to detect stomach and pancreatic cancer. To see more about their studies click on the link below: 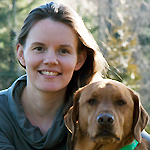 She provides comprehensive evaluations and treatments geared toward your dog's specific injury, surgical recovery, or general strengthening and conditioning on an individual basis.